There is no emotional baggage. No weight, at least. Only the secrets of the streets. Each street, each bar, each door holds a secret. And you know it and you are part of it. Because you love the secrets of this city. Your secrets too. Your streets too.

You will never be a tourist here. Does not matter if you do not come back for many many years. You will still come. You will close your eyes and know all the streets and corners. And you will remember where the moon is on the summer nights. And you will walk and see the moon over the rooftops on your left.

You will never be fully home here. Because you left it. It conserves the memory of you as a child. When you were young. And now you feel that the gravity is a little bit lesser here than in the rest of the world. And you feel light. And completely guilt-free. And you laugh, and drink wine, and do your best to keep its secrets. 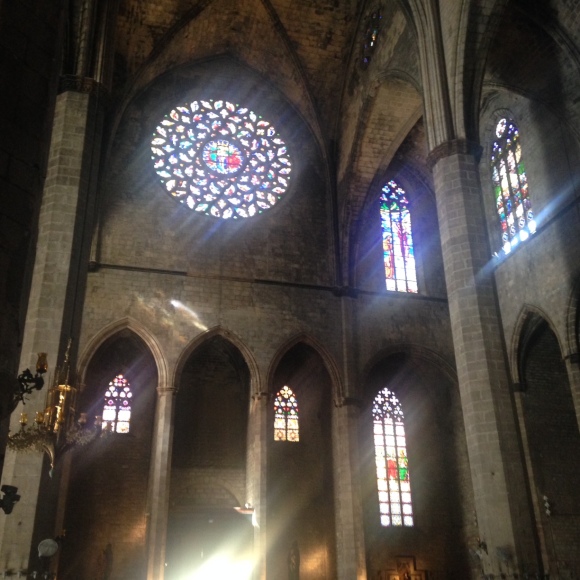 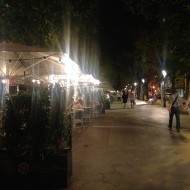 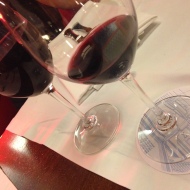 I woke up in a cold sweat. I checked my phone and it was 4:10am in the morning. And right away I started worrying about work. I thought about things that I needed to do and the upcoming trip to Lille next week. And I became more worried. I have not checked my emails since we landed in Barcelona the day before. I sat up on the sofa, opened my laptop and went through the emails. I replied one that was urgent. I hoped that going through my work would calm me down. But it did not. On the contrary, I felt guilty for coming to Barcelona and not working for the past day. I went back to bed and lay down and hoped to fall asleep. But instead I started crying. I told myself not to worry but it had no effect.

My son came from his room and lay next to me. He said he was afraid and he wanted to sleep with an adult. He was also jet lagged.

I thought about the trip, about kickboxing in the new gym that evening and about the late dinner we had with my old school friend. And all these things mixed up in my head and became one big thing, one big emotion that was meaningless. But then all new things are meaningless till you make them yours. You feel lonely, because you do not belong to them yet. And there was the salty taste on my lips. I was crying again.

It was late dinner and we were sitting outside with some wine and food plates. There were three people on the table next to us and they were upset at each other and arguing. The girl said something very impolite to the man because he did not want to share his drink with her. She rose up and told him how mean he was. And he pulled his hand away from her, drank from his glass and told her to let him be. They were loud. You don’t see anything like this in California. At least not in the places we used to go to.

Except once. When I heard a man crying. I turned my head and it was a black man crying over an untouched food plate. He was with his girlfriend and he was asking her not to leave him. And she insisted that all was over between them. And he cried and tried to talk her out of it and she just replied “no” and some other short sentences. She was done with it.

I was tired and it was still night. I think it was Hemingway who said that it was easy to be hard-boiled about everything during the day time, but at night it is another thing. I lay quietly and tried not to move.

I woke up past noon and it was very hot and humid. The kids were in the roof garden watering the plants and I could hear their happy voices. I poured myself a glass of water because it was too hot for a coffee. I stood in the kitchen for a little while. Then I also made myself a coffee. I took the coffee and water to the terrace and sat there thinking about emails I have to answer, work to do and whether or not I should go to kick-boxing this evening. “Just do the work now and decide about kick-boxing later,” I told myself. I looked at the plants on the terrace and suddenly felt completely fine. All the night worries were gone. I still had a trace of loneliness and it reflected in everything I did. But it was ok. This was real life. I was alone. No need to pretend that I was not.

I sat on the sofa with the laptop on my knees and did all the work I had to do. I napped and then took my boxing gear and went to the gym. There I wrapped my hands, put the boxing gloves on and we started. All I could see was the other boxing gloves. And the narrow eyes over these other boxing gloves. Eyes with a focus of a hunting animal. When the round ended I thought that my eyes must look the same when I fight. I drunk water in gulps and the new round started. And all I did was focus on punching better. Each punch was important and it must be good. Do not slack. Do not shorten it. You must last a little bit longer.  That’s the trick, you must last a little bit longer.